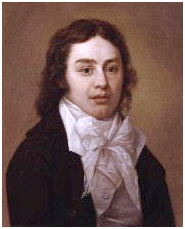 Coleridge first visited Nether Stowey in 1794 during a walking tour in Somerset.  Here he met Tom Poole, the Stowey tanner  who was to become a life long friend.  With the help of Poole, Coleridge moved to Nether Stowey in January 1797 with his wife Sara and their new-born son, Hartley.  Coleridge wished to lead a simple life, growing food for his family, reading and, above all, writing poetry.  In July 1798 William Wordsworth and his sister Dorothy visited and were so enthralled by Coleridge's company that they immediately decided to rent a mansion called Alfoxden, near Holford, three miles west of Nether Stowey.

Within a year of moving to Nether Stowey, Coleridge had written some of his most famous works: The Rime of the Ancient Mariner, Frost at Midnight, This Lime Tree Bower my Prison and the opium inspired Khubla Khan.  In spring 1798 he collaborated with Wordsworth on a volume of poetry called Lyrical Ballads.  Having travelled for several months in Germany, Coleridge and his family left the cottage in Nether Stowey in October 1799.During his three years in Somerset, Coleridge walked for miles nearly every day, drawing inspiration for some of his best known works form the beautiful landscape around him.

For further information on the life and works of Samuel Taylor Coleridge you might like to look at the following recommended websites and books: