Information to help you plan your walk

When information is received about the route, this page will tell you of diversions and updates along the Coleridge Way.

Read the fabulous detail of this group of walkers hiking the whole of the Coleridge Way in just two days.

2019 marks the 150th anniversary of the publication of Lorna Doone - a novel so popular it has never been out of print since! Set in the sunning landscape of Exmoor the book incorporates wonderful descriptions of the most remote and rugged parts of Exmoor, including real life events such as The Great Winter and The Monmouth Rebellion, plus the folk traditions of the notorious Doones and the highway man Tom Faggus – the ‘robin-hood’ of Devon.

The Coleridge Way follows much of the Doone Valley as it winds its way to its finish at Lynmouth so be sure to take a walk in this anniversary year. Further details on the anniversary and special events are available here.

Unfortunately the Coleridge Way Horse Riding Route that ran between Nether Stowey and Exford can no longer be promoted. Several sections relied on agreements with landowners to provide access along sections of the route that were not designated Rights of Way. These permissive routes were supported through Agri-environment funding agreements which the government no longer offers.

There has also been very little evidence of this route being significantly used by riders. Much of the route was established on public bridleways and quiet roads and these are still available and well maintained should people wish to find their own route through this lovely countryside. Please contact the relevant trail managers if you would like more information.

This does not impact on the walking route between Nether Stowey and Lynmouth.

Simone Stanbrook-Byrne of Somerset Life walks the Coleridge Way - read all about it here!

New Coleridge Way signs have just sprung up in Nether Stowey on Castle Street and Castle Hill to guide walkers on their way.

Please be aware that Public Bridleway WL18/39 & WL16/14, Nettlecombe are closed for closed for 21 days from Monday 19th June 2017 due to a forestry works. There is an alternative route available on this closure and this will be signed for Coleridge Way users. Further info at https://goo.gl/ZxBHwY 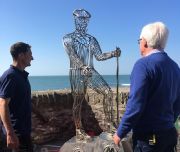 BBC Countryfile’s John Craven unveiled an iconic new statue “The Walker” on The Esplanade in Lynmouth at the western end of the route, on Monday 8 May (broadcast on BBC1 Countryfile Diaries on the 2 June).

Commissioned to mark the end of The Coleridge Way long-distance walking route, “The Walker” also indicates the closing stage of The Two Moors Way, as well as pinpointing where both these walks intersect with the South West Coast Path; the UK’s longest national trail as well as the Tarka trail.

Designed and constructed by local craftsman Richard Graham, the statue is made from reinforced 8mm marine quality stainless steel wire and shows a larger-than-life walker stretching out his hand in greeting.

Update on the closure of the footpath at Watersmeet, mentioned below.

The path is now reinstated and open to walkers. 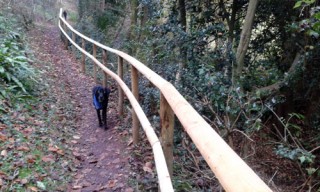 Recent improvements to the path at Watery Lane just outside Nether Stowey include a nice new wooden rail above the stream.

The footpath around Watersmeet, alongside the East Lyn River will be closed from the above date for up to 6 months. This is for major repair work. The accompanying map shows the closed section in red and the alternative routes you can take to avoid this. On reaching Ash Bridge, cross the bridge and follow the footpath alongside the other side of the river. Pass the lime kilns close to Watersmeet, then at Watersmeet cross the footbridge over the Hoar Oak Water, bearing right to continue alongside the East Lyn River, picking up the original path at Chiselcombe Bridge.