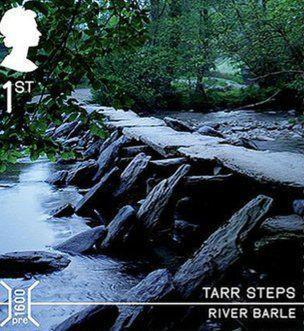 One of Exmoor’s most famous beauty spots is now featured as a first class stamp in the latest set to be issued by the Royal Mail. Tarr Steps spans the River Barle in a National Nature Reserve and is reputed by many to be the oldest bridge in the country, earning itself a place in the new set of Royal Mail stamps which feature bridges throughout history.

No one is quite sure of the history of the bridge but most believe it to date to medieval times. One legend suggests it was built by a giant who used it for sunbathing and some have suggested it dates back to the prehistoric period. The most recent studies suggest it was constructed in the 15 or 16 century. You can read more of its history here.

Regardless of its history it is a great place to visit today! Surrounded by rich native woodland teaming with wildlife the bridge is one of the most iconic sites on Exmoor. At 55 metres long it is one of the longest clapper bridges around consisting of 17 spans covered by flat stones varying from 6 to 8 feet long each.

Heavy rain and flooding over Christmas 2012 led to half the bridge being washed away. This wasn't the first time and fortunately each of the stones  (which are laid without mortar or concrete) had previously been numbered allowing the bridge to be restored in all its glory!

There are many walks in the area. A favourite is a gentle 1 hour walk which starts by crossing the bridge and turning right to follow the tranquil river upstream on our right, until the next footbridge is reached where you cross over and turn left to make a circular walk in one of the most beautiful settings. You can reward yourself at the end with a picnic, or maybe a visit to the traditional country inn adjacent to the bridge. Discover Tarr Steps and more natural features on Exmoor here.

The bridge was previously featured on a 4d stamp in 1968!