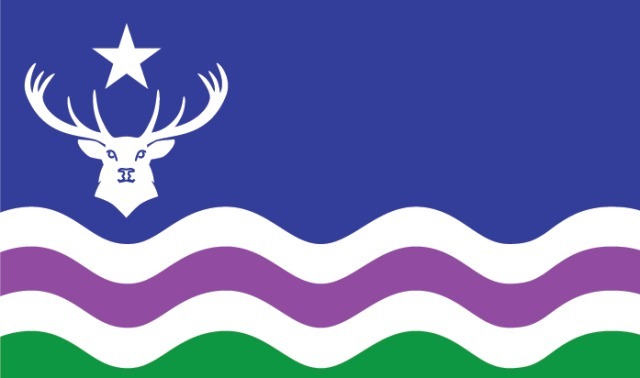 The atmosphere was positively festive as the steam train carrying the winning Exmoor flag chugged into Minehead station giving everyone, including the 5 competition finalists, their first glimpse of the winner. Television crews from ITV and BBC plus photographers from far and wide jostled for position on the crowded platform.

The flag competition was set up by 4 friends to celebrate the heritage and culture of this corner of the country and the 60th anniversary of Exmoor's designation as a National Park. The competition was financially supported by the Exmoor National Park Partnership Fund and the flag project team.

The winning flag was designed by Jenny Stevens who has been visiting Exmoor since she was a teenager. The family had been on holiday in Devon when her husband noticed the competition in the paper and suggested that she entered it – as he put it "six hours later there it was".

Jenny said: "I was trying to show the sea, the heather and the landscape, I live in London but I've been coming to Exmoor since I visited on a school trip, it's a fantastic place."

The competition was open to anyone to enter and vote in and there were designs sent in from as far away as Australia and the USA. The British Flag Institute has assisted in the process as flags have to be of a certain design, they have to have clear colours and be representative of the area.