My favourite long walk on Exmoor 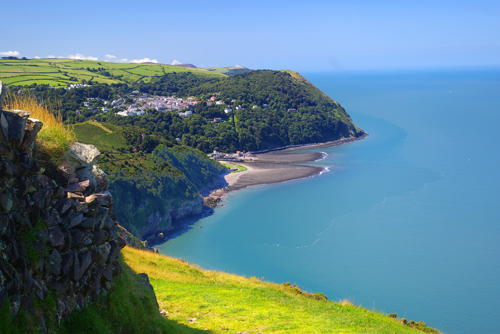 Exmoor is blessed with some of the best walking in the country. Yes really, because of the wide variety of scenery within one of the smallest National Parks. The National Park has the highest cliffs in England, deep wooded combes with fast-running rivers, often called ‘waters’, and open moorland.

My favourite walk includes all these in a 9 mile walk. Exmoor is also very hilly, so a nine-mile walk is equivalent to a 12 mile walk in most other places.

It starts in the National Trust car park at Combe Park, also known as Hillsford Bridge car park. The OS grid ref is SS739 477. This is on the A39 above Watersmeet where the B3223 goes off towards Simonsbath.

The walk starts off nice and easily, perfect for warming up the leg muscles. Having crossed over Hillsford Bridge the path follows the Hoar Oak Water down to Watersmeet. This is where the Hoar Oak Water meets the East Lyn River, which then flows down to Lynmouth. At Watersmeet you will find the National Trust lodge providing some of the best teas and delicacies which you will definitely walk off on the rest of this walk. Going slightly upstream from here, a path goes off on the left climbing sharply as it zigzags up the side of the deep valley. Near the top one goes straight ahead at the cross-roads of path to reach Countisbury. Here one passes the charming little church, well worth a visit as one passes through its churchyard to reach the South West Coast Path. Turning left downhill, the path offers fantastic views along the coast and over to Wales. Down and down one goes to reach Lynmouth, its harbour and the sea.

Lynmouth harbour is overlooked by a Rhenish Tower which was built to store seawater for indoor baths. Nearly opposite it is the Lynmouth Pavilion that is home to the National Park Visitor Centre which has lots of information inside. Next to this you will see old limekilns which are common along the North Devon coastline. The local acid soil needed lime to sweeten it so crops could be grown. Next to the limekilns is the Cliff Railway. This climbs the cliff between Lynmouth and Lynton, 500 feet above. It is Victorian and works on a balancing act using water from a diverted local stream. I would recommend taking the ride as the walk up which zigzags across this railway, is tough going.

From Lynton the coast path follows a Victorian promenade which takes you out to the Valley of Rocks. This is a unique U-shaped valley, but not glacial. The Ice Age reached the coast of North Devon and Exmoor, but could not penetrate it. The theory is that it did block the exits for the East and West Lyn Rivers and they were forced to divert creating this valley which is parallel to the coast. They reached the sea at the end of this valley at Wringcliff Bay. Once the ice retreated the rivers returned to their original exits at Lynmouth and this valley has silted up since, making it U-shaped.

The walk crosses the end of this valley giving wonderful views before going around the back of Lynton to reach Lynbridge. Here the walk crosses an old bridge over the West Lyn River before climbing on to the cleave of the East Lyn River valley. Yet more fantastic views open up as the walk continues above the sessile oak clothed combe. The walk ends by going round into the Hoar Oak Water combe before dropping down to Combe Park and the start of this great walk.

You can get this self-guided walk and others from my website: http://www.westcountrywalks.co.uk/full_day_walks_booklets.html