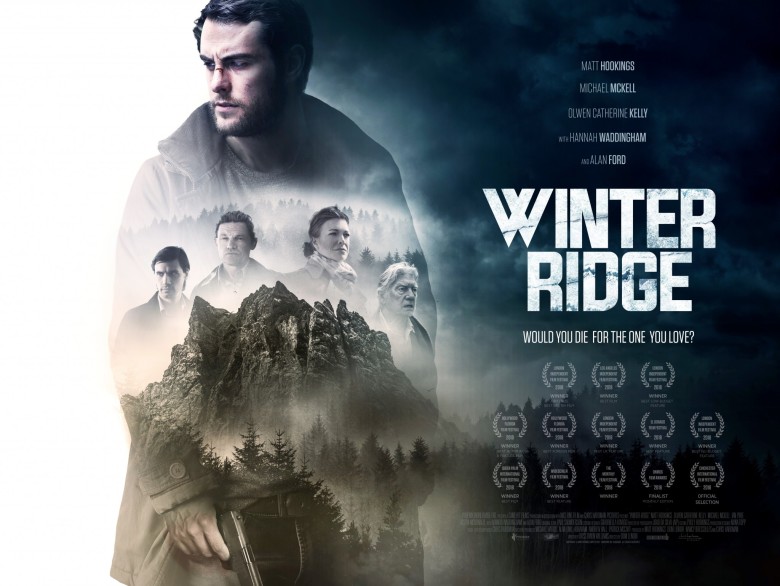 Winter Ridge, the multi-award-winning psychological thriller filmed around the Exmoor coastal towns of Lynton and Lynmouth, will have its first showing in North Devon on Wednesday 5th September at Scott Cinema Barnstaple as the start of a 30 Cinema run in London and the South West, including the Southampton Film Festival.

The story of Winter Ridge, filmed in April 2017, centres around a young detective played by Matt Hookings, who arrives home on his anniversary to find his wife has been in a devastating car accident.  Seven months later she is still in a coma and the detective, unable to accept her condition, throws himself into a new case that soon develops into a murder investigation and manhunt for a serial killer targeting the elderly. The film stars Matt Hookings (Maleficent), Hannah Waddingham (Game of Thrones), Alan Ford (Snatch), Olwen Kelly, (The Autopsy of Jane Doe), Justin McDonald and Michael McKell (Allied).

Several of the locals of Lynton and Lynmouth appear in the film as extras.

Lynton resident Diana Mitchell helped the production team by acting as its voluntary location manager. “Director Dom Lenoir chose Lynton and Lynmouth and the surrounding Exmoor area because of our remote Victorian towns that are full of character and set in a rugged landscape with a dramatic coastline,” said Diana. “The Valley of Rocks with cliffs plunging down to the sea, densely wooded hills and the wild expanses of the moors are a stunning backdrop helping to create the visual and emotional impact they wanted for the film.”

Scenes were filmed in Lynton’s Grade II listed Gothic and Tudor style town hall and in a number of other properties that were lent by locals. Residents also helped out with sourcing cars and even an ambulance for some of the scenes.

Suzette Hibbert, who was Mayor at the time said: “Locals were happy to have the film production team here and to help out however we could. The film will enable many thousands of people to see what we have to offer in and around Lynton and Lynmouth and that should help to bring in visitors to Exmoor. Not only that, as a thank you for our cooperation, the production team offered to make a cinema standard promotional film of the area.”

Directing Winter Ridge, Dom Lenoir has an expansive cinematic approach, having directed two features, Nightscape and Aleister Crowley: Legend of the Beast, the latter making an official selection at the London Independent Film Festival. Dom creates stories that challenge his viewer and leave an emotional impression by the end of the film through thought-provoking subject matters. Dom also has a keen interest in location shooting, which will be reflected in Winter Ridge with the film set in the remote British landscapes of Exmoor.

Producing and overlooking the visual effects (VFX) of the film is Chris Hardman who has worked in the visual effects industry and developed his skills through films such as Avatar, Star Wars: The Force Awakens, Marvel’s Ant-Man, the Harry Potter and Pirates of the Caribbean franchises, and Spectre.Also on board to produce was Nancy Bressolles, from the production company Nice One Film, which specialises largely in feature film production.

Lynton and Lynmouth
The pretty seaside town of Lynmouth is built around a small harbour; home to pleasure craft and inshore fishing boats, which hint at a past when it was centre of a herring trade that once sustained the community. Perched on the steep hills, some 500 feet above is Lynton with its stone fronted balconied Victorian terraces and villas.

The towns are connected by an ingenious water-powered Victorian Cliff Railway. It is the steepest railway of its type in the world and a novel and exciting way to travel, which offers stunning views. Its power source is water from one of the two Lyn rivers that tumble from Exmoor through deep valleys as a series of small waterfalls then meet in Lynmouth where they flow across its rocky shore to the open sea.

This area, descriptively termed England’s little Switzerland, nestles within the Exmoor National Park, a wild and evocative landscape that is home to herds of majestic red deer and hardy wild ponies and where sure-footed feral goats graze on the steep cliff-side at the Valley of Rocks, unconcerned by the drop to the sea hundreds of feet below.

Coleridge, Wordsworth, Shelly and R.D. Blackmore all found inspiration here.  Now the town council is hoping other film makers will see this location and be drawn here.