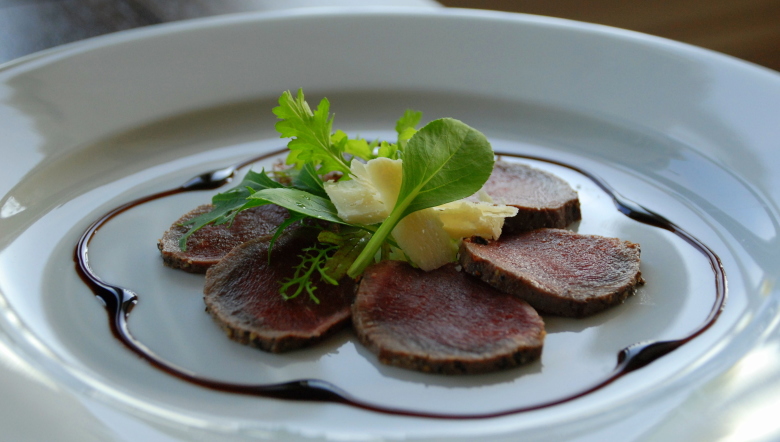 Visit Exmoor, the area’s official tourism organisation, is delighted to have been nominated for a ‘Best in UK Tourism Award’ from the British Guild of Travel Writers. This prestigious award is given to organisations that promote new tourism initiatives all over the world and this year sees the Eat Exmoor project make it to the top three.

Eat Exmoor has been recognised for its work to promote local food and drink and for highlighting the link between the beautiful and diverse Exmoor landscape and its delicious produce. In partnership with Exmoor National Park Authority, Visit Exmoor has worked hard to highlight local producers, Exmoor specialities, and the very best places to buy and eat local produce.

“The 32 page, Eat Exmoor colour guide and comprehensive web section have been very well-received by visitors looking for recommendations and we have had lots of press interest,” enthuses Jennette Baxter, Marketing & Development Manager for Visit Exmoor. “Exmoor National Park Authority organised the Eat Exmoor Trade Show which was a big success, and the CareMoor for Exmoor Dining Events continue apace. There are plans in place for retail marketing workshops and an updated Eat Exmoor Guide for 2019. Interested parties should contact Visit Exmoor for details,” she added.

For the past 40 years, the British Guild of Travel Writers has recognised scores of new tourism initiatives by handing out special awards. Some projects have cost millions; others are simpler community projects that take just as much effort and love.

Guild member, travel writer and publisher Hilary Bradt had been in the area researching the second edition of Slow North Devon & Exmoor* when she came across the project.

"Exmoor is such a beautiful place and a lot of its charm lies in the many farms producing terrific food,” says Hilary, who put the project forward for judging. “This initiative to bring farmer, food producer and visitor together is such good news. I try to nominate projects achieving great things on a small budget. The big, swanky places don't need our help!"

The final winners will be announced at a glittering ceremony at the Savoy Hotel in London in November.

Producers are pleased that local food and drink are being highlighted in this way.  Will Rayner, Porlock Oysters, summed up; “Exmoor has long been recognised for its natural beauty but now, with the help of Eat Exmoor, the spotlight is being directed with foodies in mind. Porlock Bay Oysters are just one of the unique tastes of the area and it’s wonderful this helpful guide lets visitors discover the many culinary delights that are on offer in this beautiful National Park.”

Local food and drink producers and outlets can join Visit Exmoor for the specially discounted rate of just £60 per annum. Please contact marketing@visit-exmoor.co.uk for details.

Visit Exmoor has been in award-winning mode. Punching well above its weight, the organisation came 2nd in the South West, and 7th overall, in the 2017 English Tourism Social Media Index which ranks 133 tourism bodies according to best use of social media, beating many much bigger and better funded tourism bodies. Exmoor was also recognised for its outstanding contribution to tourism in the South West Tourism Awards earlier this year.   “We are working hard to promote the best the area has to offer,” says Baxter. “I hope that the industry will see the benefits of working together through Visit Exmoor for the good of all.”