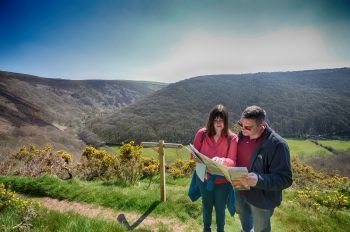 A new website promoting the Coleridge Way has been launched at www.coleridgeway.co.uk.

The new website is designed to make it easy for those wishing to plan a holiday using all or part of the route and carries information ranging from accommodation to some of the sites of interest featured along the route. Full route guides, with mapping, are available free to download on the site alongside videos, images, practical information and even an opportunity for those that have completed the route to share their story with others. Extensive use of interactive mapping is made to present information clearly and the site is fully responsive for use on a range of devices, from a smartphone to a desktop computer, with ease.

“We are really pleased to be able to launch this new website to further promote the Coleridge Way as a key attractor to all Exmoor has to offer” Said Evelyn Stacey, Chairman of Exmoor Tourism. “We are grateful for the support of partners and hope that businesses will also support the site as we benefit from increasing interest in activities such as long distant walking and cultural heritage.”

Initially launched in 2005 the Coleridge Way was extended last year to make a 51 mile walking route between Nether Stowey in the Quantock Hills AONB to Lynmouth on the North Devon Coast within Exmoor National Park. The original intention was to link together many of the smaller villages and less-visited gems along the way allowing walkers to choose their pace, completing the route in anything from 3-6 days on average. There is also a 34 mile riding route between Nether Stowey and Exford. The routes follow in the footsteps of the Romantic Poets taking in many of the places visited by influential writers such as Samuel Taylor Coleridge, Wordsworth, Byron, Shelley and others.

“Since we extended the route last year we’ve seen a significant rise in interest in the route and walkers undertaking the route” said Dan James, Sustainable Economy Manager at Exmoor National Park.

“Our hope is that this new website, alongside the videos and new leaflet produced last year, will further increase interest in people visiting some of the quieter parts of the area which still offer a great experience, particularly when linked into the work of the Romanic Poets and visiting the places they wrote about.”

Damon Cox of Encounter Holidays regularly organises packaged walking trips along the route and is one of the co-ordinators of the Coleridge Way business group. Commenting on the new site Damon said “What an archive of information for any walker, casual or route marcher. It really sells not only the walk, but the whole area as big, bold and beautiful. This is the best website for a specific named walk I have seen.”

Businesses along the route wishing to advertise on the site can contact Exmoor Tourism on 01769 550490 / secretary@exmoor.com. Prices start from just £25 if a business is already listed on the main Visit Exmoor website.

The site was jointly commissioned by West Somerset Council and Exmoor National Park Authority in partnership with Exmoor Tourism as part of the EU Interreg funded COOL tourism project. It is now managed by Exmoor Tourism alongside the main Visit Exmoor site promoting the Greater Exmoor area and all it has to offer to the world.